Tobacco Taxes and the Threat of the Illicit Market: Southeastern Europe

Over the past five years, Tobacconomics has been partnering with think tanks in low- and middle-income countries to improve our understanding of the economics of tobacco and tobacco control around the world. Our work aims to answer the questions set out by six research core competencies (shown below). The competencies are based on current political discussions surrounding tobacco control efforts.

In Southeastern Europe, our think tank partners apply the methods discussed in the Tobacconomics Toolkit on Measuring Illicit Trade in Tobacco Products to estimate the size and flow of illicit tobacco trade. Many existing studies on the topic were funded by the tobacco industry, resulting in overestimations. The industry has used their findings to discourage tobacco control and effective tobacco taxation around the world. The research highlighted below provides a more accurate representation of the illicit market.

Our think tank partners in Albania, Bosnia and Herzegovina, Kosovo, North Macedonia, and Serbia conducted surveys of smokers to understand the scope of tobacco tax evasion and avoidance (chart below). In these countries, illicit tobacco consumption ranges from 14.6% of all consumption in North Macedonia, to 32.3% in Bosnia and Herzegovina. There is also significant variation in the size of the illicit market depending on the type of tobacco product. Though generally quite small as a proportion of the total tobacco market in most countries in the region, the majority of the hand-rolled (HR) tobacco market is illicit in the countries, while in contrast, the majority of the manufactured cigarette (MC) market is licit. This stark difference suggests that increased oversight is needed specifically of the hand-rolled tobacco market, and particularly better control of the tobacco leaf supply chain. 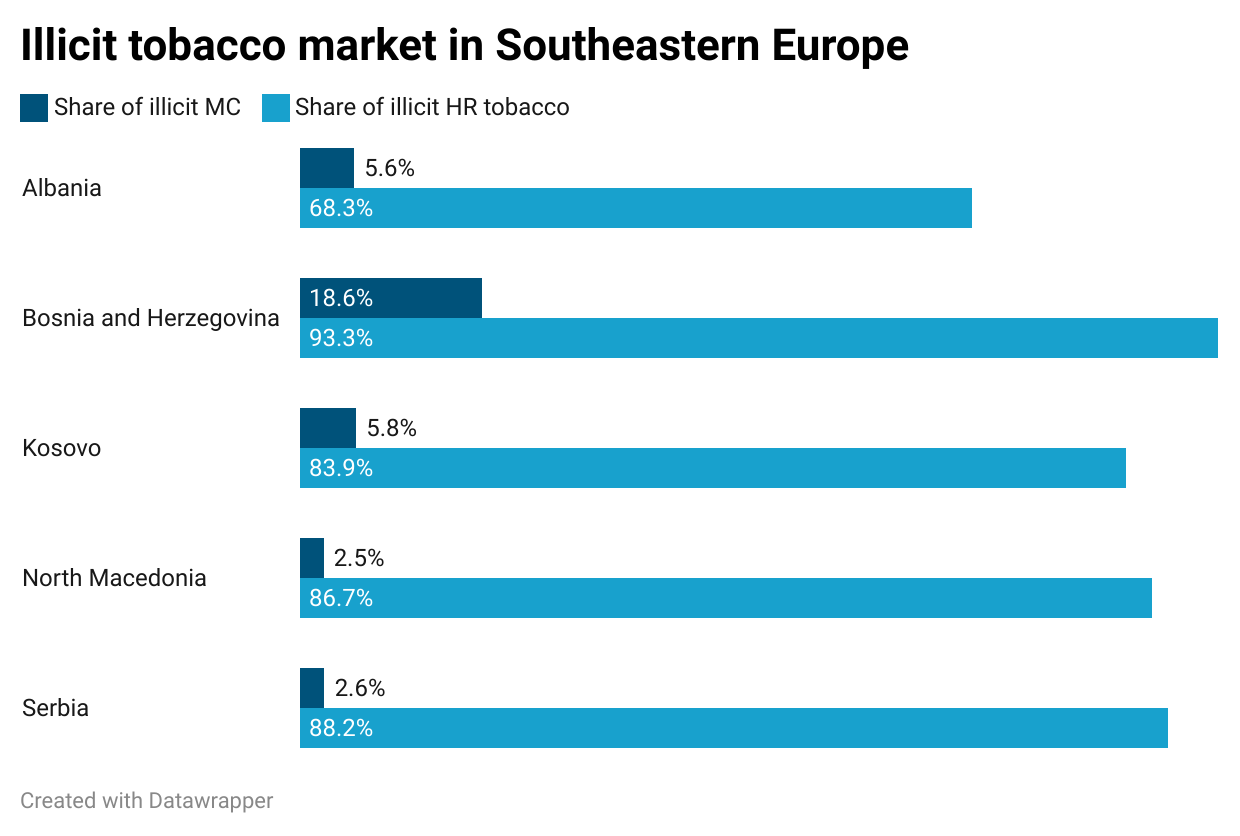 IES examined tax evasion across the region to improve the understanding of illicit tobacco users. Women, low-income earners, and older smokers are more likely to evade tobacco taxes relative to the rest of the population. The findings also show that smokers are more likely to evade taxes if they reside near countries with more illicit consumption. This suggests that there is a spillover effect between countries in Southeastern Europe, which requires improved coordination by policy makers in the region including stricter border controls.

The research above provides objective estimates of the illicit market for policy makers and highlights the key sources of tax evasion in Southeastern Europe. Global evidence suggests that strengthening tax administration and border control is necessary to reduce illicit trade. At the same time, tobacco tax increases can raise much needed revenue for governments while improving public health.

This blog concludes our series on the evidence produced by our think tank partners in low- and middle-income countries in Asia, Latin America, and Southeastern Europe! If you haven’t already, catch up on the previous blogs in the series here.