In 2017, Tobacconomics began the Think Tanks Project with the goal of building a local evidence base on the economics of tobacco control in low- and middle-income countries. The research we produce is guided by six research core competencies (shown below as questions) to ensure that it is both timely and relevant for policy discussions. We hope our findings can be used to inform policies and strengthen tobacco control around the world.

The tobacco industry claims that increasing tobacco taxes would threaten a country’s economic wellbeing as decreased demand would cause the loss of jobs in the sector and throughout the economy. Research from our think tanks suggests, however, that tobacco production and manufacturing are not significant contributors to national economies. Furthermore, growth in other industries more than makes up for any small losses that may be experienced in the tobacco sector. 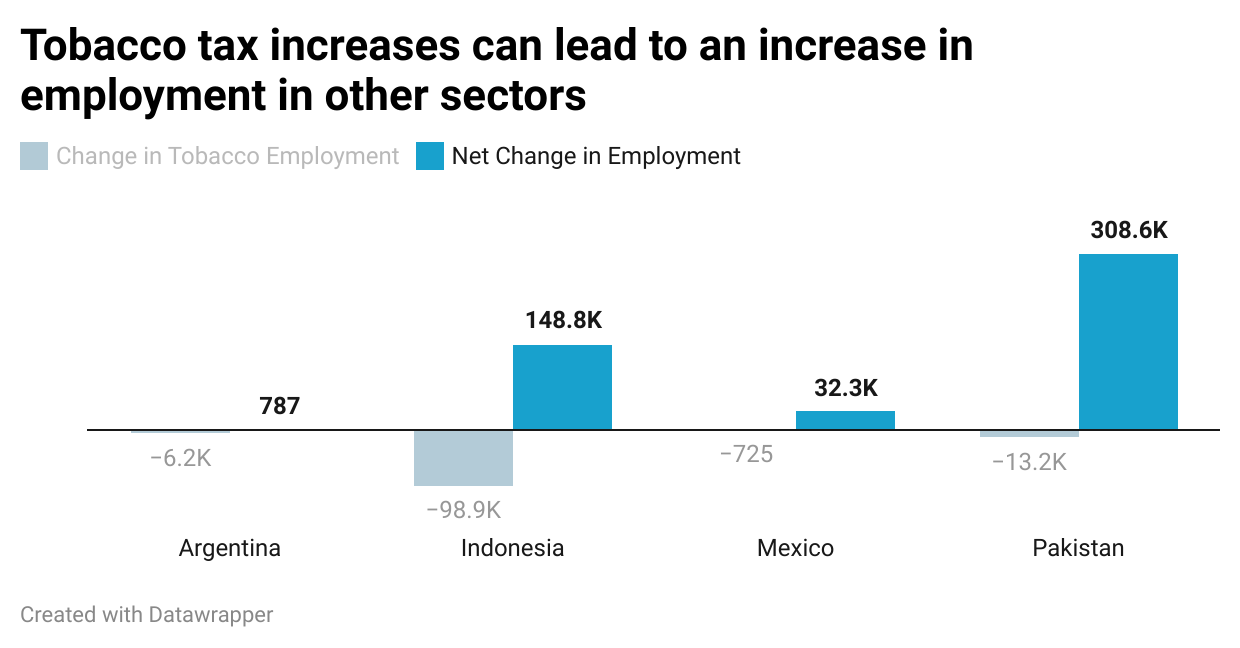 In Pakistan, SPDC used computable general equilibrium (CGE) modeling to analyze the current contribution of the tobacco sector to the Pakistani economy, as well as the impact of a cigarette price increase on the supply side (Table 1). The researchers find that tobacco farming and manufacturing equates to less than 0.5% of the GDP, and the cigarette industry employs only 0.2% of the labor force. If Pakistan raised the excise tax share to the recommended 70% of the retail price (shown in chart above), employment income in the cigarette industry would decline, yet overall employment income would increase and the number of jobs would increase by 0.5%.

SPDC also used input-output (IO) analysis to simulate the macroeconomic impact of a tobacco-free Pakistan under two scenarios. In the first scenario, consumers would dedicate their tobacco spending towards food, and in the second, consumers would dedicate half towards food and half towards education (Table 2). Under both scenarios, there would be a net increase in output, income, and employment. Redirecting spending away from tobacco and towards more productive goods and services is beneficial both on an individual and a macroeconomic level.

In Indonesia, threats from the tobacco industry regarding the potential harm of increased tobacco taxes have largely blocked tobacco control efforts. CISDI models the impact of three different cigarette tax increases to dispel these myths (Table 3). Each one would increase the total output, number of jobs, and income, largely due to government spending. The researchers also find that a larger tax increase of 45% (shown in chart above) would improve macroeconomic factors most, with a IDR 26.24 trillion increase in total output, 0.12% increase in jobs, and IDR 6.61 trillion in additional income per year.

Recent tax reforms in Argentina have successfully increased tobacco taxes and advanced tobacco control efforts in the country. Critics argue that these measures negatively affected employment and the economy even though tobacco cultivation accounted for only 0.03% of the total production in 2018 and only 0.06% of GDP. Research from CEDLAS examines the validity of these arguments and models the impact of a 15 percentage point increase in tobacco taxes by 2025 (Table 4 and shown in chart above). The results show that any jobs that would be lost in the tobacco sector under this scenario would largely be gained in other sectors. The country would even experience a small growth in jobs in the long-term if the government allocated the additional tax revenue towards public investment (shown in chart above).

In Mexico, tobacco use places a huge strain on public health, while contributing very little to the economy. Only 0.01% of jobs in the country are in the tobacco sector. Our think tank partner, CIAD, considered the effect of two possible tobacco tax increases on employment, a specific tax of MXN 1.35 per cigarette and MXN 1.50 per cigarette (Table 5). In these scenarios, between 686 and 725 jobs would be lost, or only between 0.095% and 0.102% of all jobs, as the tobacco sector does not interact significantly with other economic sectors. Further, if the additional tax revenue from raising cigarette taxes to MXN 1.50 were allocated towards the health sector, there would be a net gain of 32,285 jobs (shown in chart above).

In North Macedonia, tobacco and tobacco products represent 20.4% of all agricultural and food exports, equating to 1% of the GDP. The country is one of the 30 major tobacco-producing countries in the world and one of the 20 major exporters of raw tobacco. Analytica conducted a review of the country’s tobacco subsidy policies and assessed the impact that these policies have on other sectors of the economy. Tobacco growing is heavily subsidized by the government, representing 25% of all agricultural subsidies. The country exports tobacco along with fresh fruits and vegetables, yet spends more importing expensive processed foods. Although farmers are incentivized to grow tobacco, tobacco farming is decreasing. Those who continue to grow tobacco are more likely to live in poverty as their net salaries are lower than the country average. These agricultural policies are not sustainable in the long term as the global demand for tobacco continues to decline. Instead, investments can be made in food production at both the crop and processing levels to reduce the cost of imports.

Our think tank partners around the world demonstrate that tobacco growing and production is not significantly benefitting economies, while burdening public health and other sectors. Despite claims from the industry, increasing tobacco taxes would not cause a significant decline in jobs or economic output. The additional tax revenue collected can be used to stimulate more productive sectors of the economy, including health, education, and public investment, in addition to assisting in the transition of workers in the tobacco industry to other jobs. There are numerous substantial benefits to raising tobacco taxes and prices, with minimal impact on macroeconomies.