Happy International Women’s Day from Tobacconomics! Tobacco control is a critical issue for women’s well-being, making it an especially important topic of discussion for today. In 2020, 7.8%, or 231 million, women used tobacco globally. This translated to 1.51 million deaths attributable to smoking in 2019, most of which occurred in low- and middle-income countries. In fact, nine of the ten leading causes of death among women that year, are associated with tobacco use (graph below). Even these staggering statistics do not tell the whole story because women experience both direct and indirect harm from tobacco use. Below, we highlight the country-specific evidence produced by our think tank partners in low- and middle-income countries on the impact of tobacco on women. 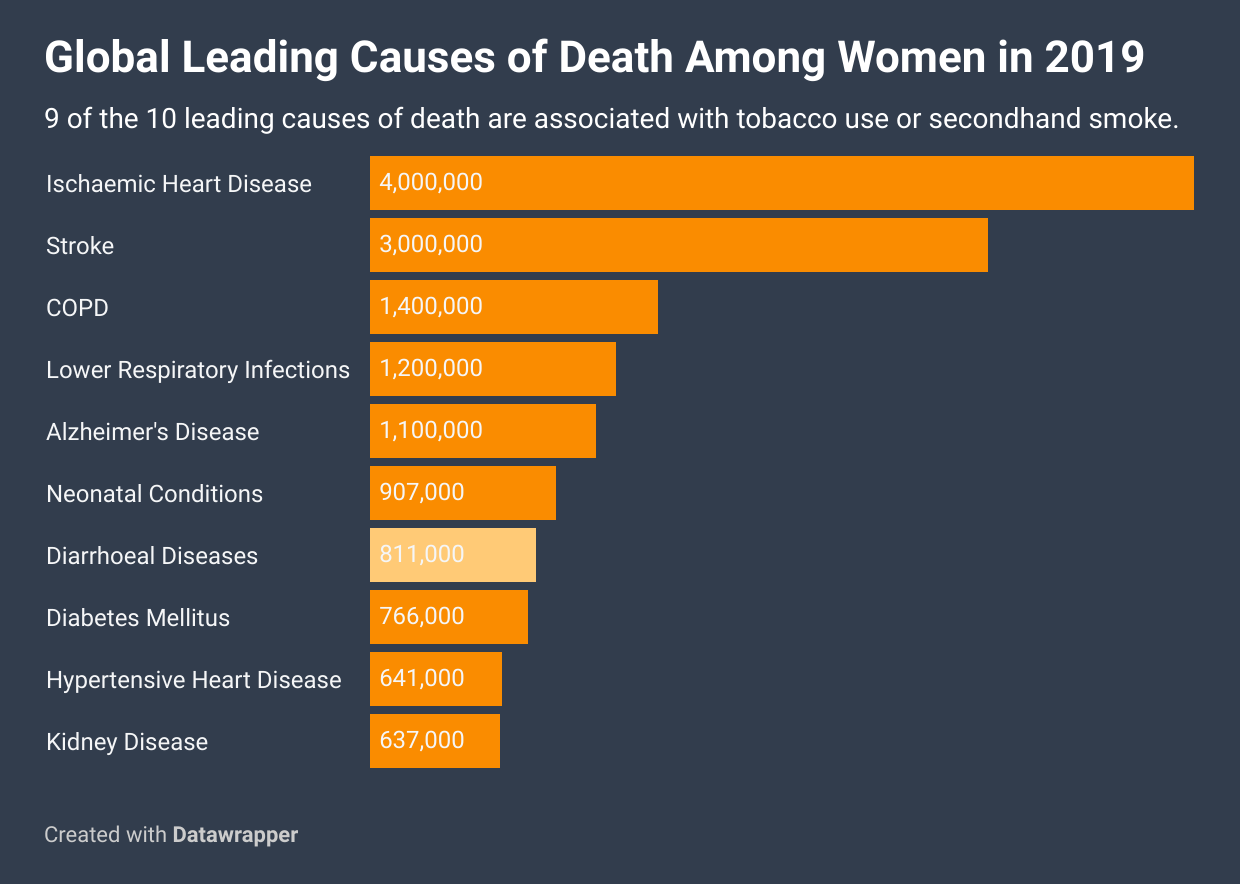 In many countries in Southeast Europe, smoking prevalence among women is very high. Of the six countries where our think tanks conducted household surveys (Albania, Bosnia and Herzegovina, Kosovo, Montenegro, North Macedonia, and Serbia), women’s smoking prevalence was above 30% in each of them, except Albania and Kosovo. In Montenegro, the recent increase in smoking rates among women has actually closed the gender gap. Girls between the ages of 13 to 15 in Montenegro experienced a troubling increase in prevalence as well, from 2.8% in 2014 to 8.1% in 2018.

In Bangladesh, the trends over time show that tobacco control efforts may not be effectively reaching women. Between 2009 and 2017, smoking prevalence among men decreased much faster than smoking prevalence among women, from 58.0% to 46.0% and from 28.7% to 25.2%, respectively. The use of smokeless tobacco, on the other hand is more common among women than men (24.8% compared to 16.2%) due to existing cultural practices, which provides an opportunity for targeted interventions.

Even in countries where smoking may not be as prevalent among women, they are still impacted indirectly. The harmful effects of secondhand smoke exposure on health are well-documented, and women are exposed both in their homes and in public spaces. In addition, tobacco use is a financial burden on households. In Pakistan, households with a tobacco user spend 2.9% of their monthly household budget on tobacco. Smoking households in Serbia spend over 9% of their monthly budgets on tobacco products, up from 5.8% in 2006. This crowds out spending on other goods, such as basic food, health, and education, especially in low-income households, and women suffer as a result.

Evidence shows that tax and price measures are the most effective way to reduce tobacco consumption, but they may be especially effective for women. Increasing cigarette prices by 10% in Mexico would reduce the probability of smoking by 4.6% for women, compared to 3.5% for men. Women are more supportive than men of such policies- around 30% of women in Albania and Kosovo were strongly in favor of a 20% increase in the price of cigarettes.

These findings show that tobacco use negatively affects women in a variety of ways. In some countries, tobacco use, including cigarettes and smokeless tobacco, remains very high among women. In others, women are indirectly harmed by secondhand smoke exposure and the financial burden of household spending on tobacco. With the focus on gender equity goals on International Women’s Day, tobacco control remains a key part of this greater mission, especially in low- and middle-income countries.