Tobacco Taxes and the Threat of the Illicit Market: Asia

In 2017, Tobacconomics began partnering with think tanks in low- and middle-income countries as part of the Think Tanks Project. This project aims to the produce local evidence on the economics of tobacco and tobacco control. Our work is guided by six research core competencies (presented below as questions), which ensure that the research is both relevant and timely for policy discussions.

One of the main arguments the tobacco industry presents against raising tobacco taxes, is that they will lead to an increase in illicit trade. Prior to the start of this project, estimates of the illicit market were mostly produced or sponsored by the industry using opaque and questionable methodology. Our think tank partners across the region of Asia applied the methods described in the Tobacconomics Toolkit on Measuring Illicit Trade in Tobacco Products to objectively assess illicit trade. Their findings are generally much lower than tobacco industry estimates and suggest that illicit trade is more connected to failures in tax administration than tobacco tax increases. When tobacco tax increases are implemented along with strengthened tax administration, they typically do not lead to an uptick in the illicit market. In several cases, illicit trade has decreased even as tobacco tax rates have risen. 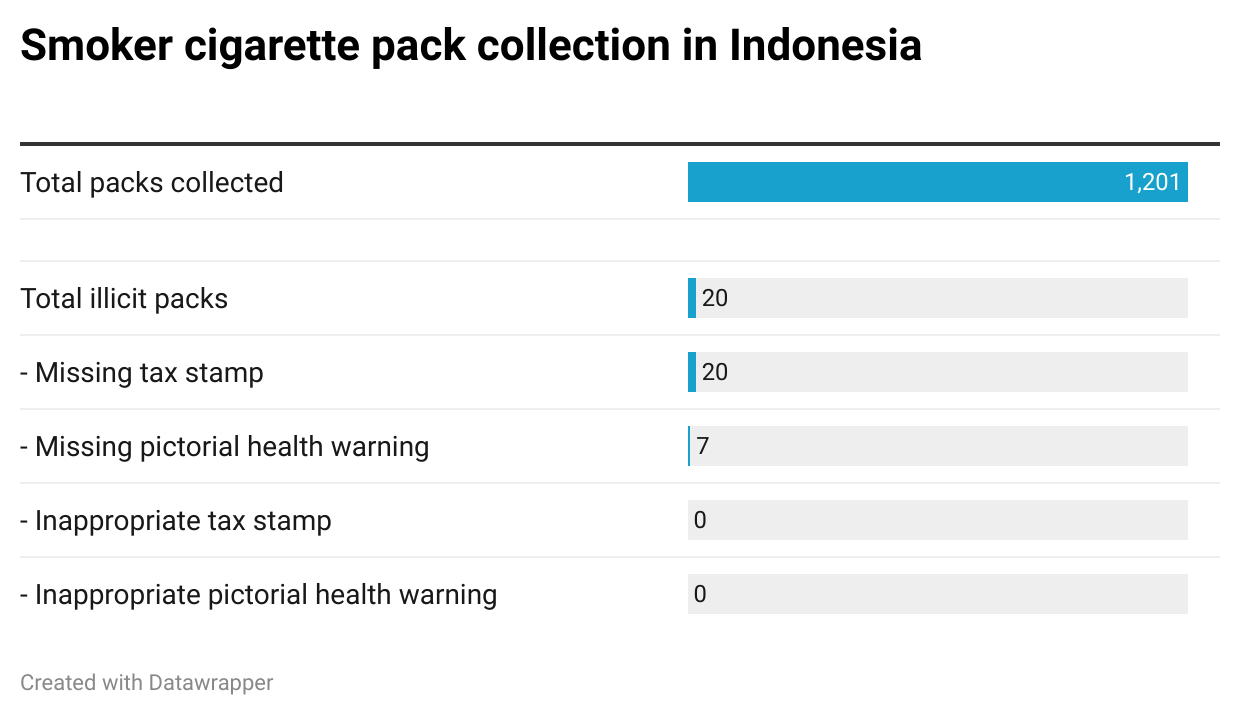 DEPOCEN assessed trends in the illicit cigarette market in Vietnam by repeating an illicit trade survey from 2012 (analyzed in Minh T Nguyen et al., 2019). DEPOCEN researchers find that five years later, in 2017, after the country increased the ad valorem cigarette excise tax from 65% of the ex-factory price to 70%, illicit cigarettes accounted for only 13.72% of total cigarette consumption, compared to 20.49% in 2012, before the tax increase. Researchers also find that 84% of illicit cigarettes are concentrated in the southern provinces of Vietnam which border Cambodia, rather than distributed evenly across the country. Jet and Hero, which are legally imported from Indonesia to Cambodia before being smuggled into Vietnam, are the most popular illicit brands. Notably, these brands are more expensive than the domestic licit ones. Since 2012, the market share of these two brands decreased from 16% to 11% in 2017, as policy makers strengthened border control and surveillance. The findings from this study demonstrate that policy makers can effectively decrease illicit trade while raising tobacco taxes by implementing more effective controls to reduce smuggling.

IPPM compared trends in the size of the illicit market over time with tobacco taxation policies in Vietnam. The results show that the volume of illicit cigarettes has decreased over time, even as tobacco taxes increased, which suggests that cigarette prices are not a key determinant of illicit trade.

DEPOCEN also studied the impact of administering three specific excise tax rates on the illicit cigarette market. In Vietnam, illicit cigarettes tend to be more expensive than licit, domestic ones as consumers seek out certain foreign brands not available legally. As a result, the researchers find that even the largest specific tax of 5,000 Vietnamese dong would not result in a substantial increase in the illicit market, despite opposing claims from the industry. It is also likely that raising legal cigarette prices through a specific excise tax would lead to an increase in prices in the illicit market as sellers of illicit products take the opportunity of price increases in the licit market to maximize their profit margins. These price increases would decrease consumption. These simulations highlight the opportunity for policy makers to improve cigarette taxation policies.

In Pakistan, an important component of illicit trade comes from under-reporting of production by the tobacco industry as a result of the government’s reliance on company self-reporting for taxation purposes. SPDC released two studies which estimate the under-reporting of cigarette production by the industry from 2015 through 2021 in Pakistan. In the first study, SPDC utilized two methods to assess under-reporting between 2015 and 2018: a supply function based on production data along with the price of cigarettes, and an analysis of financial statements of the two largest tobacco companies (tables 1 and 2). The researchers estimate that undeclared production in 2017 amounted to 18 billion sticks, and 13 billion sticks in 2018, resulting in Rs 31 billion in revenue loss, or Rs 37 billion after accounting for General Sales Tax revenue.

In the second study, SPDC estimated under-reporting between 2018 and 2021 using the financial reports of the three largest tobacco companies in the country (table 3). They find that the tobacco industry under-reported products by 4 billion sticks each year, resulting in a tax revenue loss of Rs 29.5 billion in that time period. Monthly production trends also show that manufacturers use front-loading as a strategy to avoid tax increases. Prior to the release of the budget, tobacco companies ramp up production, and then decrease it following the release of the budget. This reduces their tax burden and lowers government revenues. Rather than continuing to rely on self-reporting, policy makers should increase oversight of the tobacco industry by directly monitoring production.

In addition, SPDC evaluated the contribution of the self-governing Azad Jammu and Kashmir (AJK region) to the flow of illicit cigarettes in Pakistan. The tobacco industry argues that this region is responsible for a significant portion of the country’s illicit market. Although there are no official estimates, based on government tax collections and interviews with AJK government officials, the cigarette industry in AJK accounts for only 1% of total cigarettes produced in Pakistan, contradicting the industry’s claims.

The research produced by our think tank partners on the illicit market in Asia refutes arguments made by the tobacco industry in opposition to tobacco tax increases. Governments should focus on strengthening their tax administration, monitoring, and tracking systems to decrease the size of this market. At the same time, raising cigarette taxes can reduce consumption and raise additional tax revenue for governments.

Next up, we will explore the illicit market in Latin America!