Indonesia has been the focus of attention for tobacco control advocates for some time. The high and growing rates of smoking combined with a large population have also made it a commercial priority for the tobacco industry over the last few decades.

Historically, Indonesia has a weak record on tobacco taxes, which in turn resulted in it having some of the lowest cigarette prices globally. This is compounded by a complex tax structure that categorizes cigarettes based on type, price, and volume, providing opportunities for producers well as consumers to avoid tax increases by trading down to cheaper brands in response.

However, recent events mark significant progress. The Ministry of Finance announced on September 13, 2019, that cigarette excise taxes will increase by an average of 23%, while increasing the government set retail prices even more. This is the largest increase in tobacco taxes in Indonesia, and one of the most significant globally in several years. Global evidence shows us that large tax increases directly reduce the affordability of tobacco products and thus, effectively reduce tobacco use. 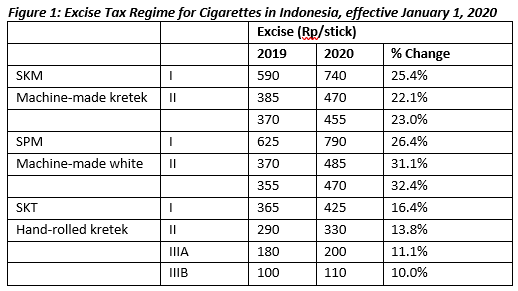 Reasons for the dramatic variation between tax increases on hand-rolled and machine-made cigarettes likely stem from significant lobbying efforts from the cigarette manufacturing industry, which has heavily focused arguments around the livelihoods of cigarette rollers and tobacco farmers. However, the market share of hand-rolled kreteks has been in decline for a number of years due to the reduced popularity of these products over time. Normally, the tax structure, combined with the differentials in tax increase would normally create significant concerns of trading down to cigarettes where the tax increases were lower (i.e., hand-rolled kreteks). However, nearly all hand-rolled kreteks are just as, or more expensive, than the machine-made cigarettes, even though they are taxed significantly less.

Indonesia follows a process where the tax structure and rates are reviewed by the Ministry of Finance each year. In 2019, no tax increases or adjustment of tiers were implemented, most likely due to the Presidential election. However, in 2017 and 2018, taxes were increased by approximately 10% each year. The 2020 increase by an average of 23% is a great achievement and sets a new benchmark for the country on annual tax increases. We expect to see large reductions in tobacco use in Indonesia as a result of this increase and are monitoring the results. Stay tuned for more research on this in 2020!