Do Tobacco Taxes Harm the Poor in Southeastern Europe?: A Review of Evidence from the Region

In 2017, Tobacconomics began working with think tanks in low- and middle-income countries around the world to produce local economic evidence on tobacco taxation and other tobacco control strategies. Guided by the questions six research core competencies (shown below), we conducted research that is both timely and relevant to current policy discussions under the Think Tanks Project. These efforts can be used to inform more effective policies since many countries struggle to implement best practices in tobacco taxes (learn more in the Tobacconomics Cigarette Tax Scorecard). As a result, governments are missing the opportunity to improve public health, while raising additional tax revenue.

In this blog, we will highlight the findings from our think tank partners in Southeastern Europe, which relate to the third research core competency. The blog is part of a larger series, where we review the research produced under each competency by region (Asia, Latin America, and Southeastern Europe).

Think tanks across the region examined the impact of tobacco tax increases on smokers by income group. While the tobacco industry claims that such policies would disproportionately harm low-income individuals, their claims are not supported by rigorous analysis of the full impacts of tobacco taxation on lower-income populations.

Low-income smokers tend to be more responsive to price increases because of their limited available budgets. With a higher price elasticity of demand for cigarettes, they typically reduce consumption more than their higher-income counterparts. This change in the consumption of cigarettes in response to a 10% price increase is presented below: 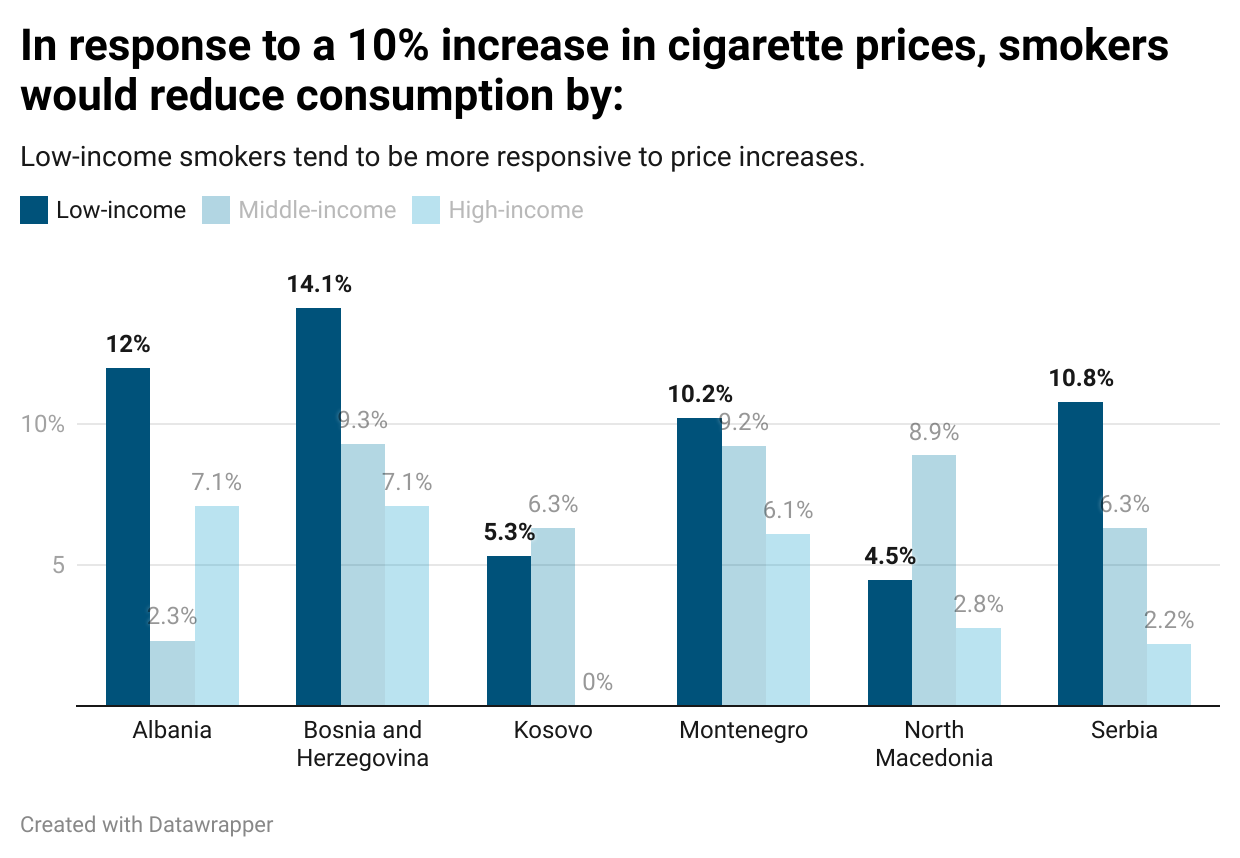 In Albania, researchers simulated the impact of a 25% increase in the price of cigarettes as a result of a 43.6% increase in the specific excise tax. Low-income households would reduce consumption the most, while experiencing the lowest additional tax burden compared to the other income groups. 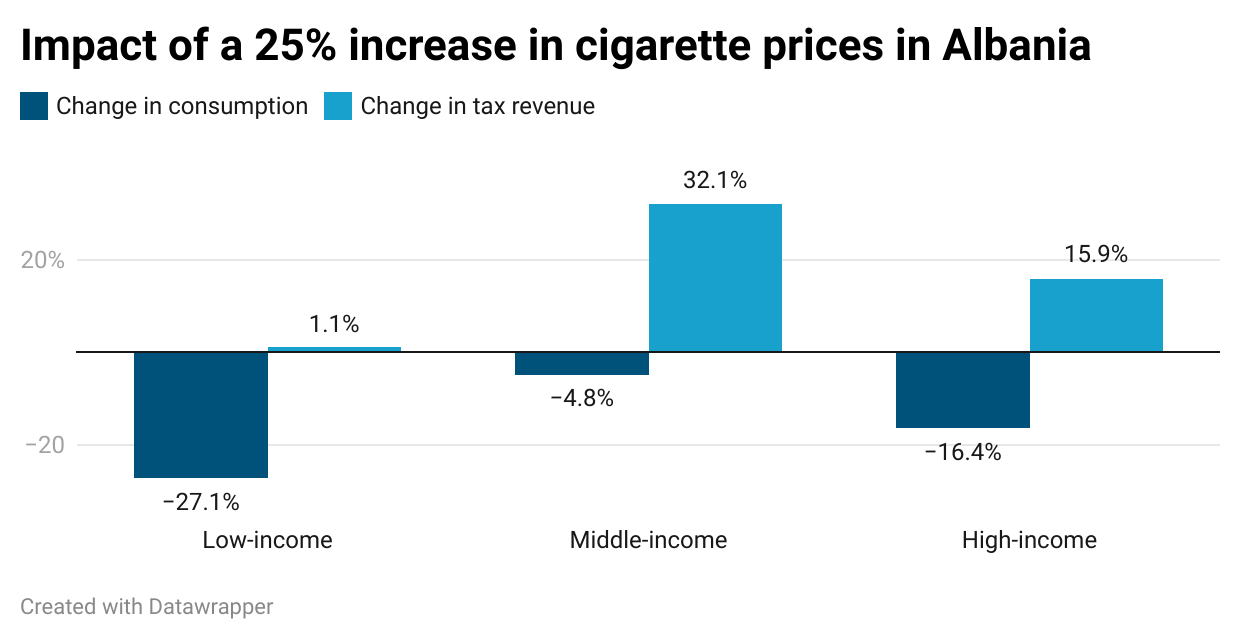 The researchers in Bosnia and Herzegovina assessed the impact of raising the specific excise tax on cigarettes by 25% in order to increase the price by 17%. Poor smokers would reduce their consumption so significantly in this scenario that their cigarette tax burden would decrease. 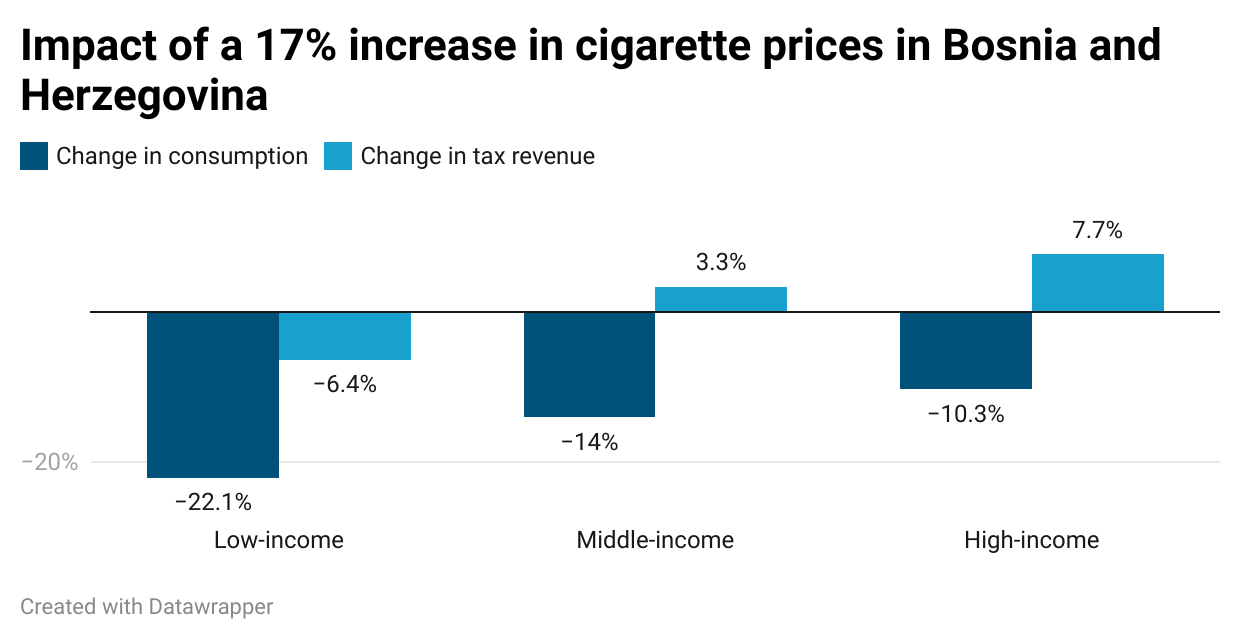 The study in Kosovo modelled a 25% increase in cigarette prices following a 47.8% increase in the cigarette excise tax. Both the low- and middle-income groups would reduce their cigarette consumption in response to this tax increase. High-income smokers, meanwhile, would face almost half of the additional tax burden. 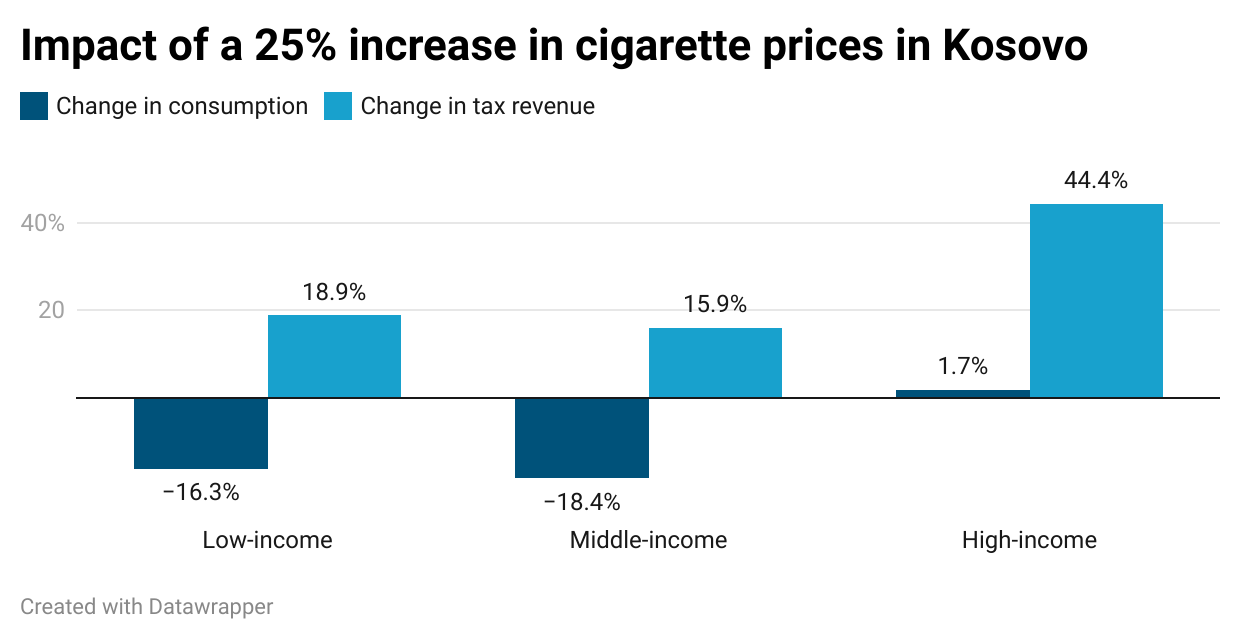 Our think tank partner in Montenegro considered a scenario in which cigarette prices would increase by 15.8% due to a EUR 0.35 increase in the specific tax along with a 7.5% decrease in the ad valorem tax. Consumption would decrease most among low-income smokers as a result of this reform, while high-income smokers would face the largest increase in tax burden. 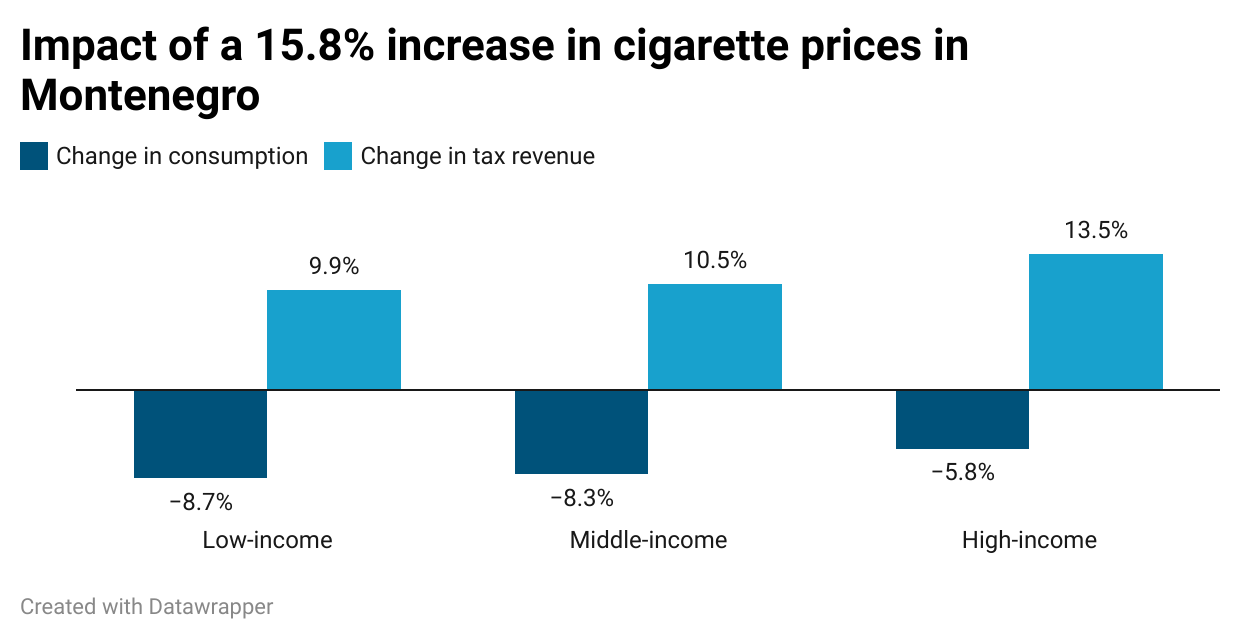 In North Macedonia, our think tank partner estimated the effect of increasing the cigarette excise tax by 25%, therefore increasing cigarette prices by 17%. Consumption would decrease most significantly among low- and middle-income smokers, with the high-income group facing the highest tax burden. 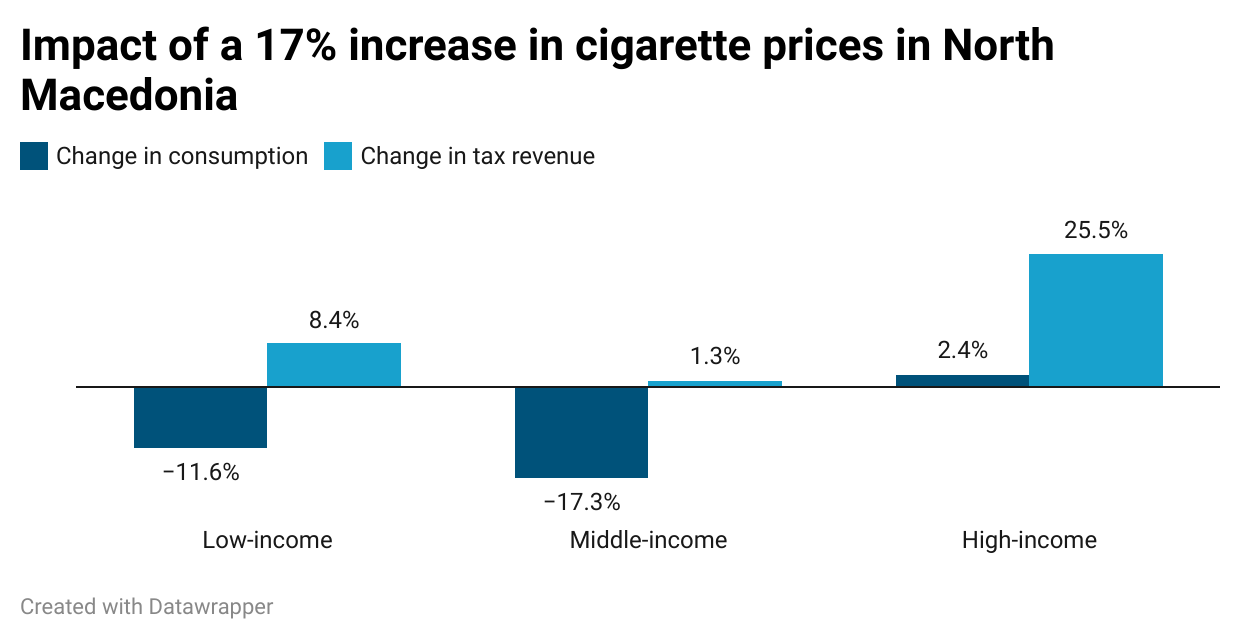 Finally, research from Serbia shows the impact of a 44.4% increase in cigarette excise taxes, which would raise prices by 25%. In this scenario, poor smokers would reduce consumption significantly more than other groups and enough to decrease their tobacco expenditure. 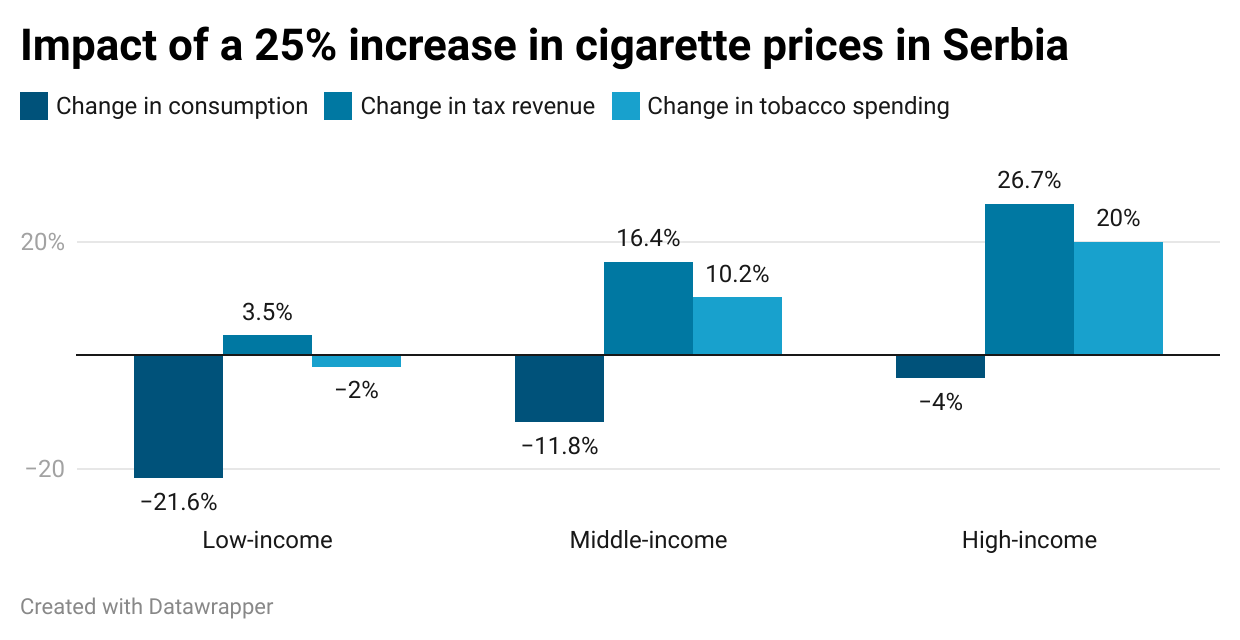 Findings from around the region shows the potential benefits of tobacco taxation, especially for the poor, despite the misleading arguments made by the industry. By increasing tobacco taxes, policy makers can raise additional tax revenue, which improve the health and economic wellbeing of low-income individuals.

Check out how tobacco taxes would impact the poor in Asia and Latin America in prior blogs. Next up in this blog series, we will focus on the fourth core competency to examine the health and economic costs of tobacco use!