Do Tobacco Taxes Harm the Poor in Latin America?: A Review of Evidence from the Region

Around the world, countries continue to face challenges in the implementation of best practices in tobacco taxation (learn more in the Tobacconomics Cigarette Tax Scorecard). Historically, tobacco control efforts were limited by a lack of local economic evidence on the effect of policies, especially tobacco taxation. To address this issue, Tobacconomics began to partner with think tanks in low- and middle-income countries in 2017. Six research core competencies (presented as questions in the table below) guide the evidence produced under the Think Tanks Project, ensuring that findings are relevant and timely for fiscal policy development. We hope that this research leads to the implementation of more effective tax policies.

Below, we focus on research from our think tank partners in Latin America, which addresses the third research core competency and explores the impact of tobacco taxes on low-income smokers. This blog is the fifth in a series where we discuss findings relevant to each competency by region (Asia, Latin America, and Southeastern Europe).

In Latin America, our partners studied the effects of tobacco use and tobacco taxation on different income groups. This review of evidence, as well as evidence from around the world demonstrate that raising tobacco taxes would be a progressive policy benefitting low-income smokers more. Tobacco use disproportionately harms low-income households, and the policies that reduce consumption would benefit this group the most. 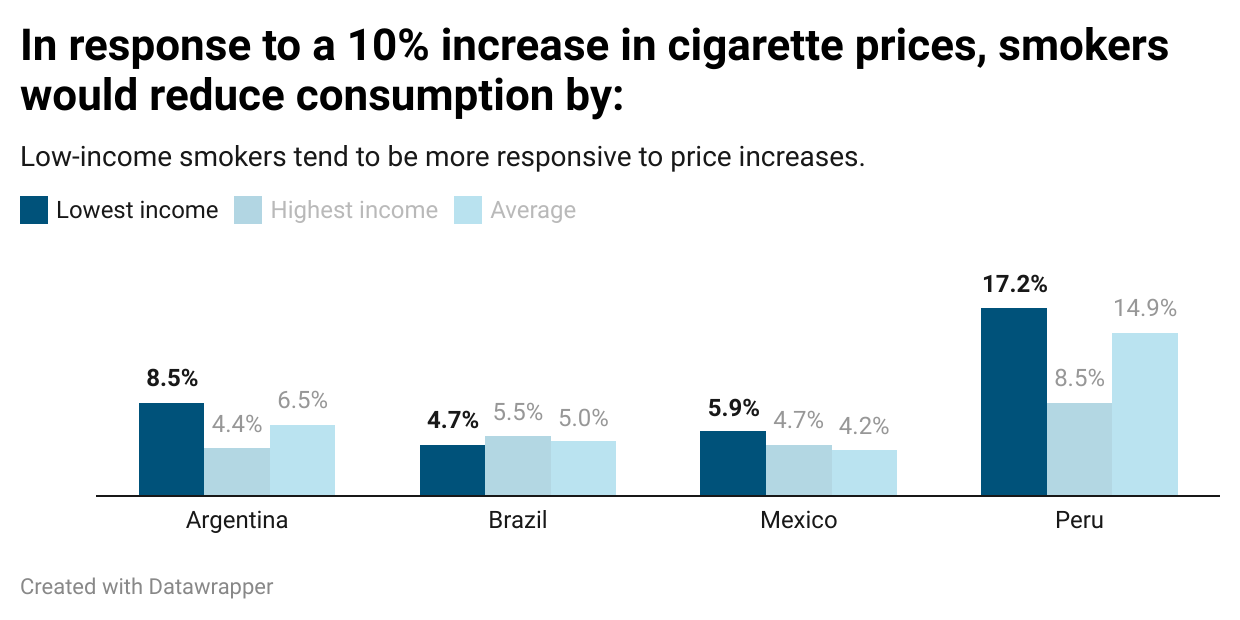 In Mexico, researchers simulated the medium and long-term impacts of an increase in the specific tax component by 1 peso per cigarette stick on available household income. Specifically, they measured changes in income due to changes in tobacco expenditure, avoided medical expenses from tobacco-attributable disease, and increase in income due to higher productivity from a longer and healthier life. Low-income households would gain the most income in each of these categories under this scenario, for a net increase of 3.4%, compared to 0.3% among high-income smokers.

Our think tank partner in Peru modelled the short-, medium-, and long-term effects of increasing cigarette taxes to raise prices by 10% (shown in table below). Similar to Mexico, they examined the change in household income due to changes in tobacco spending, averted health expenditures, and additional years of work. Overall, low-income households would increase their income by 2.3% in Peru, while middle- and high-income households would increase their income by 1.2% and 0.6%, respectively.

A study in Argentina examined the direct and indirect effects of a tax increase which would raise the price of cigarettes by 20% in households by income decile. The researchers estimated the resulting changes to cigarette expenditure, as well as changes to medical expenses, and productivity in the workforce. Overall, the poorest households would increase their income by 4 percentage points in this scenario due to averted medical spending and productivity gains in the medium- and long-term.

Researchers in Brazil also assessed the effect of a 10% increase in cigarette prices by income group (shown in table below). Although poorer households would slightly increase their cigarette expenditure due to the higher prices, they would experience the largest reduction in medical costs and increased productivity. As a result, the first- and second-income quartiles would increase their incomes by 4.24% and 5.13%, respectively, in the long-term. Higher-income households would benefit as well, but to a lesser degree, with a 2.26% increase in income for the third quartile and a 0.56% increase for the fourth quartile.

To further ensure that tobacco taxes are benefitting low-income populations, policy makers can earmark taxes and set aside the additional revenue to fund programs and services that reduce poverty. In some countries, such as Mexico, current laws limit earmarking of taxes. Our think tank partner, CIEP, discusses how an amendment to the excise tax law would allow the country to earmark funds. Once these changes are implemented, Mexico could begin a cash transfer program to food insecure households. This subsidy would reduce food poverty and inequality across the country.

Across Latin America, the tobacco industry often claims that the burden of tobacco taxes falls on low-income smokers. Evidence from the region, however, shows that this group is most responsive to price and has the most to gain in the long-term by avoiding tobacco-attributable disease and premature death. Policy makers are also able to earmark tax revenue to further anti-poverty efforts. There is ample opportunity in the region to improve public health and economic wellbeing for all, but especially for low-income individuals, by raising tobacco taxes.

In the next blog, we will examine evidence from Southeastern Europe to understand how tobacco taxes effect poor smokers in the region. Check out our blog on the Asian region if you missed it!