Mexico has just approved an update for inflation to the Special Tax on Production and Services (IEPS) for tobacco as part of its “Economic Package for the Fiscal Year 2020”—the first update of the tax since 2011. For 2020, this translates to an increase of the IEPS from 0.35 to 0.498 pesos per stick, or from 7 to 9.96 pesos per pack, making a pack of cigarettes about 3 pesos (or $US 0.15) more expensive. After 2020, the IEPS will be updated annually for observed inflation.

Updates for inflation are necessary to keep the affordability of cigarettes from increasing, and the update recently passed in Mexico is a step in the right direction. However, an update for inflation by itself is not enough to reduce affordability, and will thus have a very small impact on reducing tobacco consumption, improving public health, and generating tobacco tax revenues in Mexico. 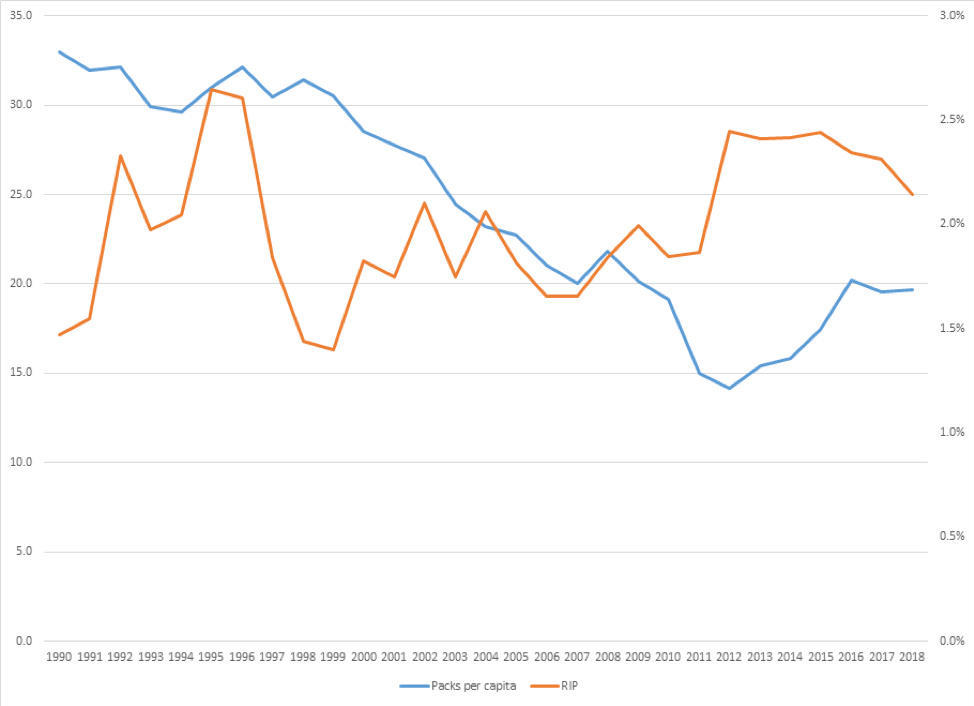 Notes: Price data are from the Economist Intelligence Unit, income from World Bank World Development Indicators, and the consumption from Euromonitor.

This is true in Mexico, where tobacco tax and price increases of the previous decade were a major driver of the higher relative income price (RIP) and thus, reduced affordability of cigarettes. At the same time, as shown in Figure 1, there were substantial reductions in  cigarette consumption. However, from 2012, given the lack of tobacco tax increase, cigarettes became more affordable and consumption increased. According to the Global Adult Tobacco Survey, smoking prevalence increased from 15.9 percent in 2009 to 16.4 percent in 2015.

These reductions in tobacco use are often more significant among low-income households. Tobacco use among poor households exacerbates poverty by increasing healthcare costs, reducing incomes, and decreasing productivity as well as diverting limited family resources from basic needs and investments in education. Higher taxes reduce consumption and help interrupt the vicious cycle of poverty. Additionally, tobacco taxes provide the opportunity to dedicate additional tax revenues to health programs that can benefit the poor. In a recent publication, UN/ECLAC highlighted that corrective taxation can effectively modify consumer behavior and be used to achieve many of the Sustainable Development Goals as we outlined in this previous Tobacconomics’ blog post.

The tobacco industry and other front groups lobby against higher tobacco taxes, arguing taxes have no impact on reducing tobacco consumption and present tobacco taxes just as an unfair way for governments to increase revenue. However, extensive evidence from Mexico, Latin America, and across the globe demonstrates that higher tobacco excise taxes are an effective policy in reducing tobacco use. These reductions result from tobacco users quitting in response to higher taxes, prices, and reductions in consumption. Higher taxes and prices are particularly effective in preventing young people from taking up tobacco use, as well as reducing health disparities given greater reductions in tobacco use among the poor in response to higher taxes and prices. Global evidence shows that tax increases that raise prices by ten percent will reduce overall tobacco use by between four and five percent. A key conclusion of a recent review was that “significantly increasing the excise tax and price of tobacco products is the single most consistently effective tool for reducing tobacco use.”

Updating taxes for inflation and income growth is a necessary measure, but to achieve significant reductions in smoking prevalence as well as reductions in tobacco-related death and disease and the associated health costs, tax increases should not only outpace inflation and income growth. They should be large enough to have a negative effect on smoking prevalence.