Most research on the distributional impacts of tobacco taxation focuses on the shift in the tax burden for different income groups that occurs immediately after a tax increase. In most countries, poorer people spend proportionately more of their income on tobacco products, and they are much more sensitive to tax increases. Thus, when faced with a tax increase, their consumption of tobacco decreases more, relative to people who are older or with higher incomes, either through cessation, decreased intensity of consumption, or not starting to smoke at all.

UIC partners in Argentina, Brazil, Mexico, and Peru have conducted new research that takes a longer-term examination of the distributional impacts of tobacco tax increases through extended cost-benefit analysis. These new findings show that not only are the short-term impacts in terms of reduced spending on tobacco largely progressive, the medium- and long-term impacts benefit the poor to an even larger degree. By quantifying the avoided medical expenses from tobacco-related illness and the gained income from the reduction of premature deaths from tobacco-related diseases, this new research provides more local evidence that increasing tobacco taxes is a pro-poor policy.

Here are the key findings from each of the think tanks—

Centro de Estudios Distributivos, Laborales y Sociales (CEDLAS) research finds that the poorest decile of households would benefit the most from a 20 percent cigarette price increase and would gain an additional 4 percent of income when savings on avoided tobacco-related medical expenses and prevented productivity losses are considered. 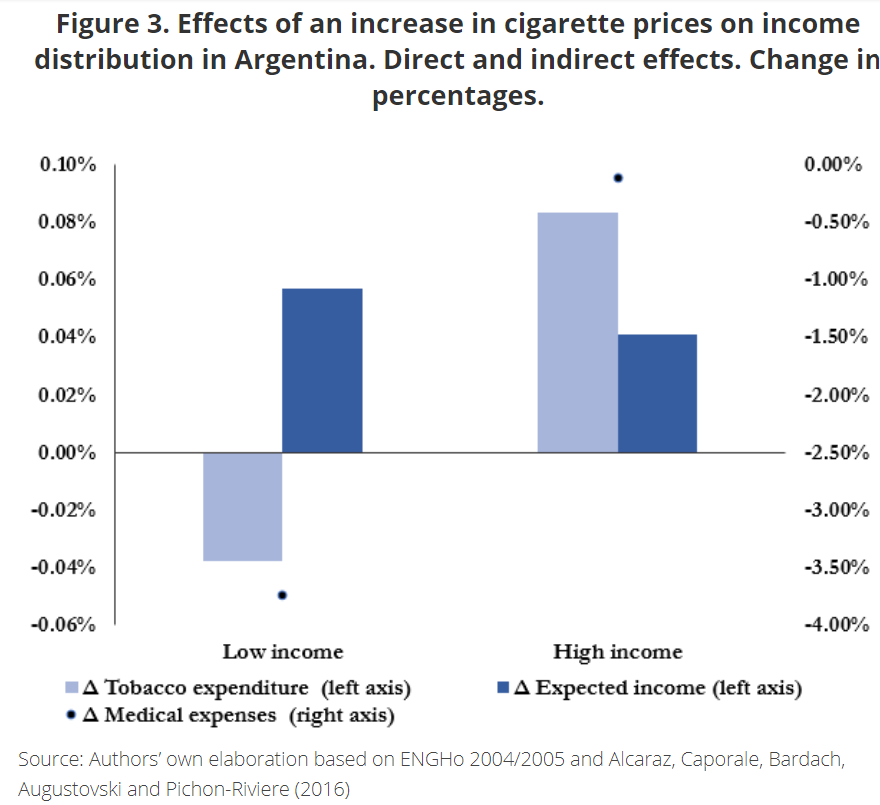 Research from the Universidade Católica de Brasília (UCB) finds that a 10% cigarette price increase (BRL 0.54) would result in a net income gain by low-income smokers of about BRL 39.00 per month (in 2019 values) due to both avoided medical expenses on tobacco-related illnesses and increased productivity. The increase of BRL 39.00 per month represents 10% of food-related expenditures among vulnerable households.

Centro de Investigación en Alimentación y Desarrollo (CIAD) research shows that increasing cigarette prices to $1.35 per stick would lower consumption by almost 34% overall with the largest reduction in consumption coming from low-income households. CIAD also found that regardless of the amount levied by the specific component on cigarettes (0.49 or 1.35 pesos per stick), up to 52% of revenue would come from higher-income groups and only up to 11% of revenue would come from lower-income groups. CIAD also recommended earmarking the revenues from the price increase, noting that earmarking revenue to a monthly transfer of $1,507 pesos to low-income households would reduce food poverty by up to 40%. 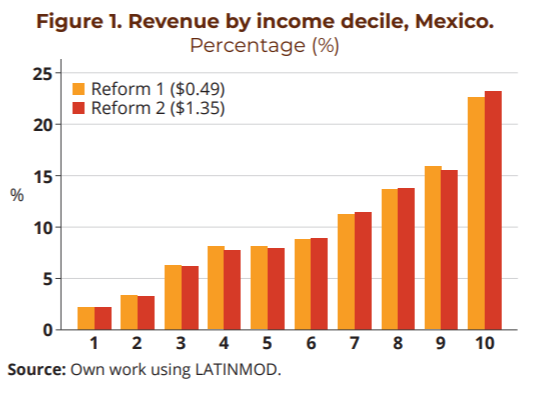 Also from Mexico, Centro de Investigación Económica y Presupuestaria (CIEP) finds that by increasing the price of cigarettes by 58% so that the tax ratio for cigarette price reaches the WHO recommended 75% ($1.35 per stick) benefits low-income groups. The combined decreases in medical expenses and increases in productivity amount to 4.1% of their household income. 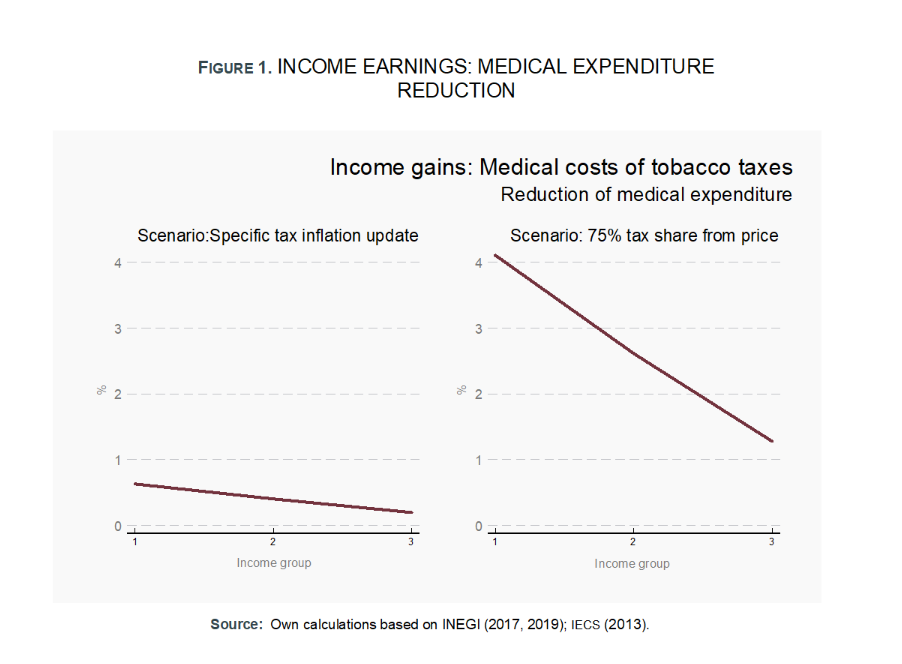 Last but not least, El Instituto de Estudios Peruanos (IEP) research found that a 10% increase in cigarette prices, as a result of tobacco tax increases, would save low- and middle-income groups a total of 3.3 million soles per year, just by reducing cigarette consumption. The change in prices would benefit the lowest-income households most as they would increase their income by 68 million soles per year: 2.5 million due to a reduction in cigarette spending, 34 million due to a reduction in tobacco-related medical expenses, and 30 million in avoided income loss due to early mortality. 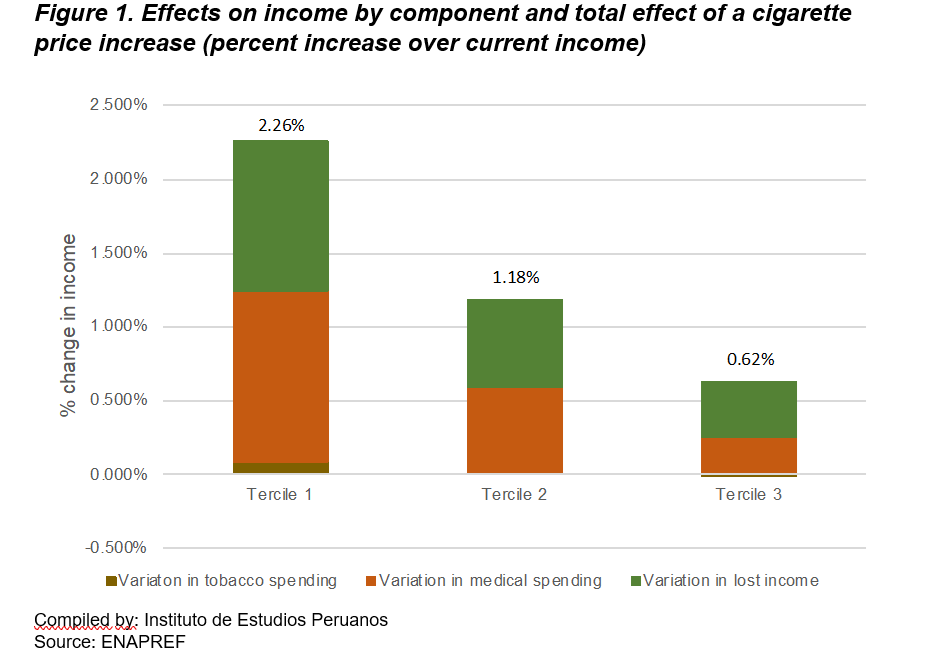 This research from Latin America is important, because it shows the progressivity of tobacco taxation increases. Additionally, this research provides evidence on how the governments can fight poverty, advance the development of a healthy workforce, and improve the well-being of its citizens all at the same time by implementing tobacco tax increases. Reducing tobacco use also helps relieve public health budgets by avoiding the economic costs of tobacco-related diseases borne by the public healthcare system. In a time when public health systems are struggling to finance efforts to fight the Covid-19 pandemic, additional tobacco tax revenues and avoided medical costs from tobacco-related diseases can provide more fiscal space.